Mellowing out in Melbourne

It can be a little draining going from place to place and changing accommodation every few days. Once in a while, it’s nice to take a breather and resist the urge to go-go-go.

With its walkable CBD and (self-proclaimed) reputation as Australia’s cultural capital, Melbourne was a great place to hit the “pause” button and enjoy city life at a more leisurely pace.

While the one-hour flight from Sydney to Melbourne would’ve been a more logical choice, my mind couldn’t shake the excitement of (!!!) trains (!!!) once I learned that a rail line linked the two cities. So, I booked the 11-hour journey and settled in for the ride with my package of Tim Tams. 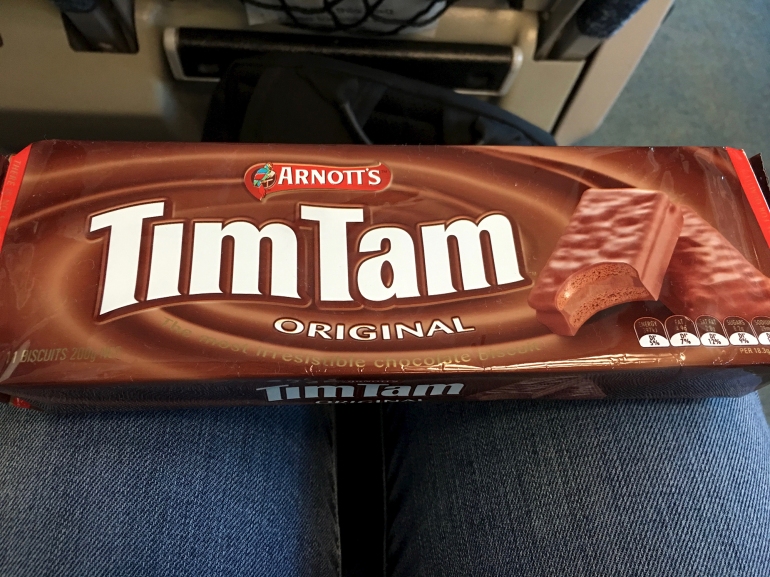 Melbourne is catching up to Sydney in size but, to me, it still felt much smaller because of its walkability, compact CBD and fantastic public transport system. Melbourne’s dense network of trams is well designed and even offers a large “free zone” in the city center. For rides outside the zone, passengers touch on/off with a reloadable myki public transport card. The #35 trams (also free) are vintage cars that follow a circular “visitors” loop. 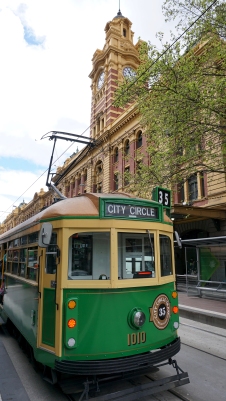 While Melbourne doesn’t boast a list of iconic must-sees like Sydney, I found it to be a great place to just hang out and enjoy the local amenities.

The Ian Potter Centre: NGV Australia, which is dedicated exclusively to Australian modern and Aboriginal art. The permanent exhibitions are free, and there’s a giant baby at the entrance to greet you … and haunt your nightmares! 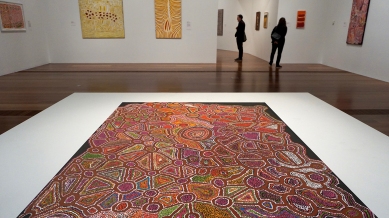 Next to the Potter Centre is the Australian Centre for the Moving Image. What an incredible place!!! I could’ve spent hours there. In fact, I kind of did. Not only does the ACMI screen current films and host workshops and events, the centre also offers a huge database of art, film and “digital culture” that visitors can access for free. In one of their viewing stations, I watched an Aussie cooking show from the ’50s, a Melbourne newscast from the ’60s, the satirical short BabaKiueria and the 2002 film Rabbit Proof Fence. 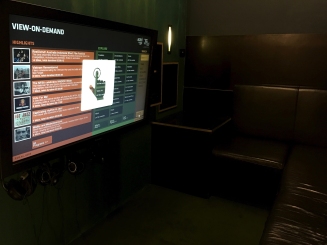 There’s also the Old Melbourne Gaol, which isn’t free but does offer a good return for the price of admission. Visitors can explore the huge Gaol at their own pace, take a guided tour of the City Watch House and visit the Old Magistrate’s Court. The individual jail cells feature prisoner photos and stories, along with ghoulish “death masks” cast post-execution (including Ned Kelly’s). The masks were originally used, among other things, for phrenological analysis to dis/prove the correlation between skull features and personality traits. The Gaol also offers other, separately priced, options like night tours, ghost tours and a chance to spend the night in the watch house. No, no, and NO!!! 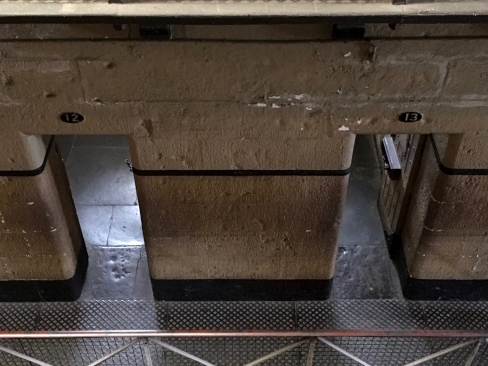 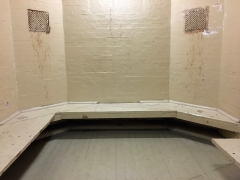 St. Paul’s Cathedral  is free to enter, but there’s a $5 AUD charge to take photos. I didn’t mind paying a few bucks to “help keep the lights on” as the cathedral staff phrased it. 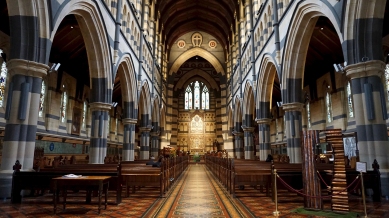 Melbourne has the Southgate restaurant and shopping complex that offers a nice stroll along the Yarra River: 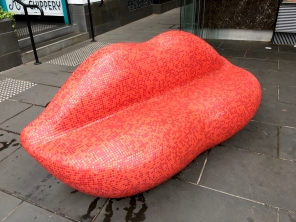 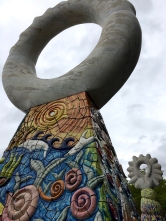 And the street-art-filled Hosier Lane: 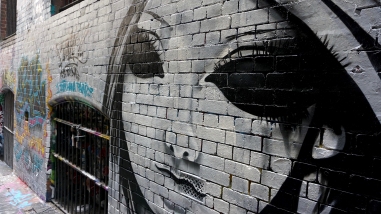 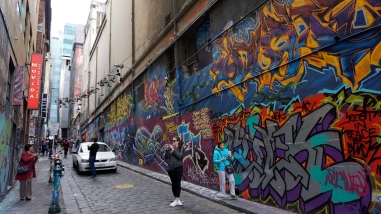 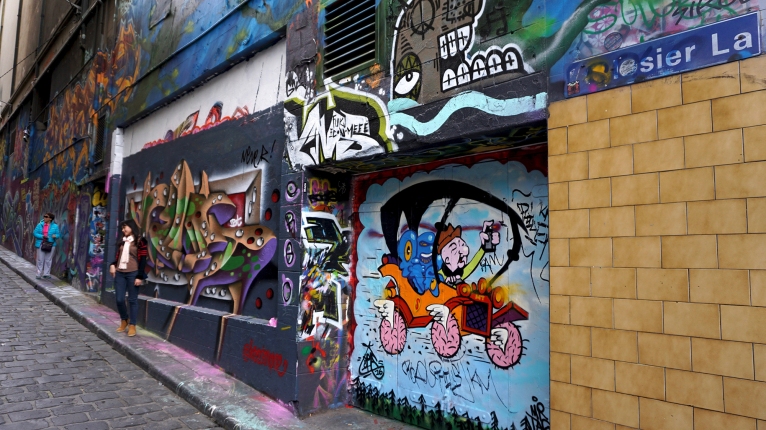 Melbourne Central, which is a combo train station, cinema and shopping complex:

There’s even an Aussie-nicknamed McDonald’s:

It’s actually officially named Macca’s. In 2013, McDonald’s wanted to recognize and honor its Australian nickname, so it changed the name/signage of select stores throughout the country.

But this was my favorite fast food name … 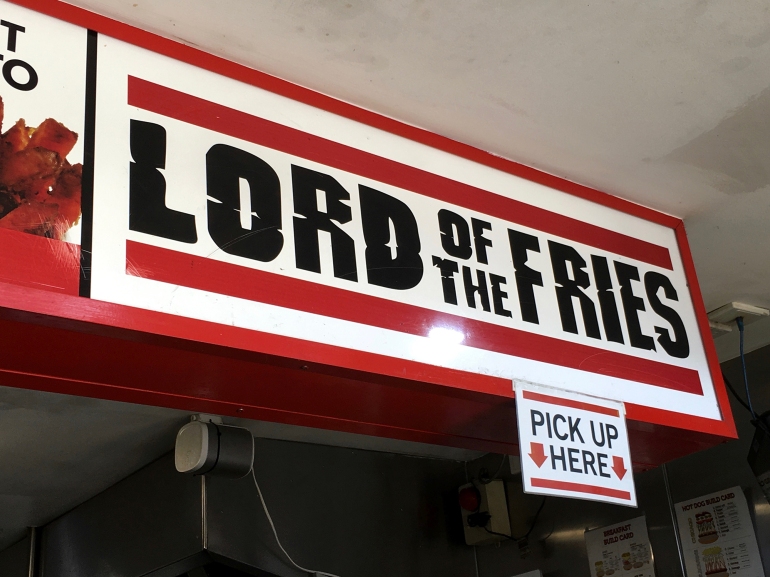 What are we? Humans? Or animals? Or savages?

But Melbourne is really the city for coffee lovers. And Asian food lovers. Thanks to Melbourne’s huge number of Asian residents and visitors, the choices for fantastic Thai, Chinese, Vietnamese and Japanese food are endless. I also found shops that sold beauty products I’d only previously been able to buy in Japan.

It was also in Melbourne that I noticed my first floor “3a” in the hotel. Because the number 4 is considered particularly unlucky in China — and maybe other countries in Asia??? — it’s often substituted with 3a instead. My Melbourne hotel’s elevator had buttons for G, 1, 2, 3, 3a, 5, 6, etc… but no button for 4.

Anyway … my time in Melbourne also gave me the chance to do some leisurely reading. I bought these two books at Dymock’s, which had a great selection. Hope I picked some good ones!

Melbourne’s also a good place to get caught up on current films. Captain Fantastic was playing at the arty Cinema Nova, and my ticket came with … flowers! These promo cards were embedded with Australian Swan River Daisy seeds. Fantastic! 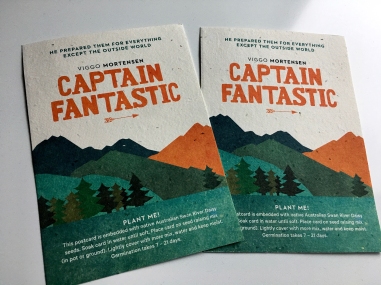 Another film I wanted to see in Melbourne was Equity with Anna Gunn. It’s certified fresh on the Tomatometer and was playing exclusively at the Cinema Nova, but I didn’t have the time to see it.

In fact, my mellow time in Melbourne was a little more go-go-go than I’d planned. I still have more details and photos to share … but I’m going to take that breather for now.

More to come from Melbourne!