Just because I’m posting about Glasgow several weeks after visiting, it doesn’t mean that I didn’t enjoy my time there. In fact, I really loved Glasgow. It has a very different look and feel compared to Edinburgh (more on that later), and there’s a sassy personality to the city that charmed me right away.

And then there are the people. I love Glaswegians!

While Glasgow struck me as more diverse compared to Edinburgh, it also felt more Scottish. I’m not sure if that’s a correct assessment, but Glasgow seemed more like a place where people were just getting on with life vs. posturing for tourists. It’s also in Glasgow where I followed Anthony Bourdain’s lead and ate at Mother India. It’s a bit confusing because there are a few Mother options. I think Parts Unknown featured their fancier restaurant vs. the cheaper cafe that I visited … twice! Needless to say, I’d have No Reservations (tee hee) about eating there again.

Glasgow also has a really good (and free!) Riverside Museum. Its most impressive displays are focused on transport, but there are also sections devoted to fashion, toys, home decor … and sea creatures. But, to me, the showstopper was the tall ship moored behind the museum on the River Clyde. This restored Victorian sailing vessel was so much fun to board and explore. They even had little buckets of water and brooms so children could swab the deck. 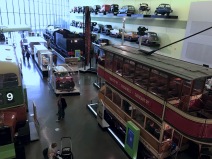 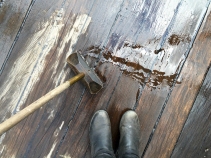 And, of course, there’s Glasgow’s famous Style Mile, the “Giant Z” of pedestrian streets filled with shops and restaurants. NOTE: In the UK, the letter Z is pronounced zed.

I didn’t take a lot of photos while in Glasgow. Similar to my time in Oban, I just wanted to hang out, eat tasty food, soak in some art/history … and swab a few ship decks.

A few more things about Glasgow: 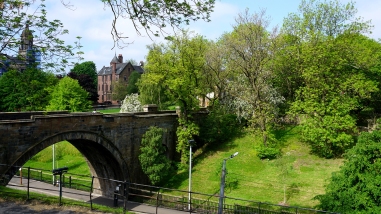 Every so often, people would come into view near the foot of the monument where I was seated, panting from the steep walk to the top. We’d have a brief chat, and they’d be on their way. Hopefully for a bit of peaceful time just like me.

Glasgow is also much cheaper than Edinburgh, which made it more affordable to spring for a hotel room. And guess who was on telly one night?

Mr Darcy! After all these years, you still have the power to bewitch.

More to come from Scotland!