As I mentioned in part 1 of this list, there are plenty of travel books and websites that detail London’s most popular tourist attractions … so I won’t rehash that information here. Most of those must-sees are well worth the time and money, but here are some more of my personal favorites:

Shakespeare’s Globe — Taking a tour of this Elizabethan theatre replica is pretty cool, but attending an actual performance is a magical experience! 2016 is the 400th anniversary of Shakespeare’s death, so there are a lot of things planned for this season. Tickets to the Globe’s plays aren’t expensive, but they can sell out quickly. I like to sit in the front row of the “middle gallery” so I can lean forward on the railing. For a small fee, you can also rent a seat cushion and back rest, which I highly recommend to make the wooden benches more comfy. Alternately, if you don’t mind standing, you can be a groundling. For £5, you can watch the performance from the floor, looking up at the stage. What an experience! The only hitch is that you have to stand the entire time and can only leave the floor during intermission.

Open House London — This annual event celebrates architecture and design. Over the course of one weekend, hundreds of London buildings are open to tour for free … many places the public can’t normally access or see without paying admission. One year, I visited Churchill’s secret, alternate war room bunker (code name Paddock). You can see pictures and read about it here. Another year, I saw Severndroog Castle and the very, very cool Wilton’s Music Hall. I also toured these old London underground cars that had been converted into elevated art studios. The dates for the 2016 Open House London are September 16 and 17, and the list of participating venues should appear on their website soon.

Bus #11 — With so much traffic congestion, London’s double-decker buses aren’t always the fastest route from A to B, but they are a unique and wonderful way to see the city. Bus #15 follows the “Heritage Route”, so it’s quite popular with tourists. But I really like Bus #11. It passes by a lot of the major sights, but also goes through Chelsea and down the King’s Road.

TIP: The #11 route begins right outside Liverpool station. If you board there, your chances of getting a front row seat on the top level are very good. If you take the bus all the way to the Chelsea Old Town Hall stop, you can backtrack on foot and walk down the King’s Road. These days, people go there for the great shopping, but I get a kick out of walking the same street that once set the stage for London’s counterculture.

Chelsea Physic Garden — While in Chelsea, it’s worth spending an hour or so in this beautiful garden that was founded in 1673. Admission’s a little pricey (£10.50), but it includes a free tour, and the tour guides are excellent. I also hear that the garden’s cafe serves fantastic cakes.

Royal Albert Hall — I was thrilled to see Jason Mraz in concert at this incredible venue a couple of years ago. Just being there was such a special experience.So much history! I kept thinking to myself: OMG, I’m watching a concert in the Royal Albert Hall!!!

NOTE: If attending a concert alone is outside of your comfort zone, I would highly encourage you to give it a try. What I love about music in a public venue is that it’s such a communal experience. Everyone’s sharing the same thing, together, in real time. I find that incredibly moving, which (by far) supersedes any weirdness I might feel about being there by myself.

Ye Olde Mitre — Built in 1546, this pub is as beautiful as it is hard to find. It’s in the center of London but tucked between buildings along a narrow alley. I’d give you directions, but that would spoil the adventure. Finding it is part of the fun!

Parks other than Hyde Park — When tourists think of green spaces in London, they usually think of Hyde Park. I’m not discouraging anyone from going there … it is very beautiful … but there are other parks that I like even better. Holland Park, Regent’s Park and Battersea Park all have their own charms and don’t feel nearly as touristy. You can also climb to the top of Primrose Hill for a beautiful view of London. Although, when I went there last week, I was couldn’t believe the number of cranes I saw towering over the buildings in the distance. So much construction! 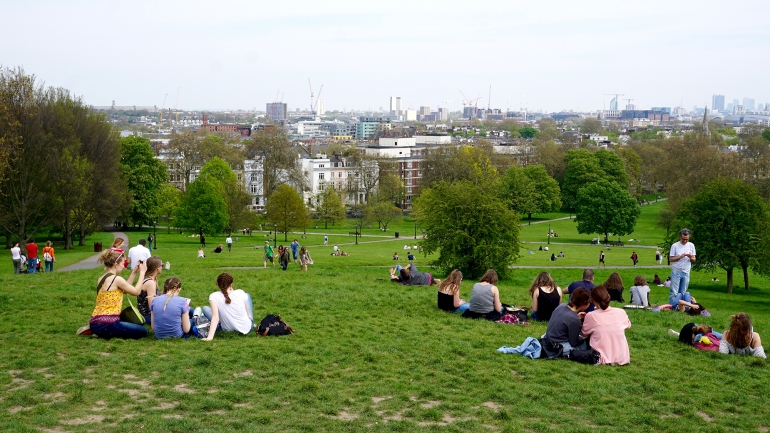 Foods other than Fish ‘n’ Chips — I totally understand the appeal of wanting to eat fish ‘n’ chips when you arrive in England, but you’ll stand a better chance of finding a good “chippy” outside of London vs. anywhere you’re likely to go as a tourist. So, if you want to try something that’s traditional, allow me to suggest an alternative: The Full English, also known as a Fry Up. There’s also Sunday roast … or pie and mash … but, when I want to indulge, I order this British brekkie. Except I cheat a bit. I’ve never gotten used to eating baked beans for breakfast. And, while black pudding technically tastes fine, the idea of it still turns my stomach a bit. Below is the latest (nearly) Full English that I got at a place in Clerkenwell called Andrews. While I was there, the restaurant was full of workers from Smithfield (London’s meat market). I took that as a good sign! 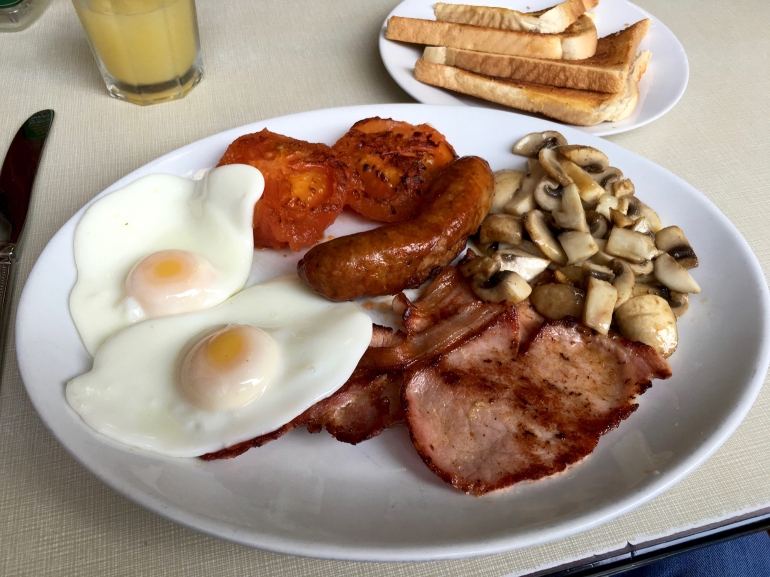 Southbank stroll — On a pretty day, there’s no beating a stroll along the south side of the Thames. I like to walk the pedestrian path starting from the Jubilee Bridge to where it terminates, not far from London Bridge. Along the way, you’ll pass the National Theatre, the British Film Institute, Tate Modern, Shakespeare’s Globe, lots of restaurants/shopping and plenty of benches for picnicking and people watching.

TIP: In the morning and during the week, it’s much less crowded and, in my opinion, much more enjoyable. On the weekends, it’s packed! 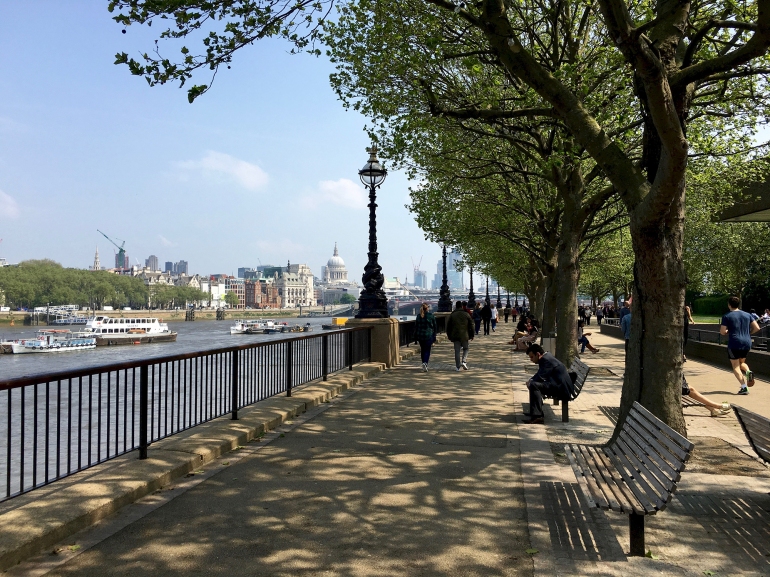 Day trip to Liverpool — If you’re a Beatles fan, there’s nothing like spending a day in Liverpool and touring John and Paul’s childhood homes, or stopping by Strawberry Fields or the Casbah Coffee Club. You can visit certain places on your own or, better yet, hire a local guide (I had a great experience with Pool of Life Tours) who will pick you up at the train station and whisk you to every Beatles sight in the city. Getting to Liverpool from London is an easy train ride (a bit more than 2 hours if your train is direct), so it’s feasible to do this as a day trip. If you want to spend more time in Liverpool, there’s even a Hard Day’s Night hotel. I’ve never stayed there, so I can’t vouch for it. But it sure sounds like fun!

Day trip to Richmond — Just 20 minutes from Central London on the tube’s District line, Richmond is compact, beautiful, and filled with lots to see and do. I really liked walking along the Thames to Ham House, then crossing the river on the Hammerton’s Ferry so I could walk back to town on the other side.

The tube and tube map — In many cities, the subway is simply public transportation … utilitarian and nothing special. But London’s tube is something special. It’s clean, well-run, and the system is huge. But navigating that system is really easy, thanks in part to the iconic map created by Harry Beck in 1931. His design was groundbreaking, and his method of using 45 and 90 degree angles (vs. a map that looks like a spaghetti bowl) has been copied in cities all over the world. Look at this beauty! 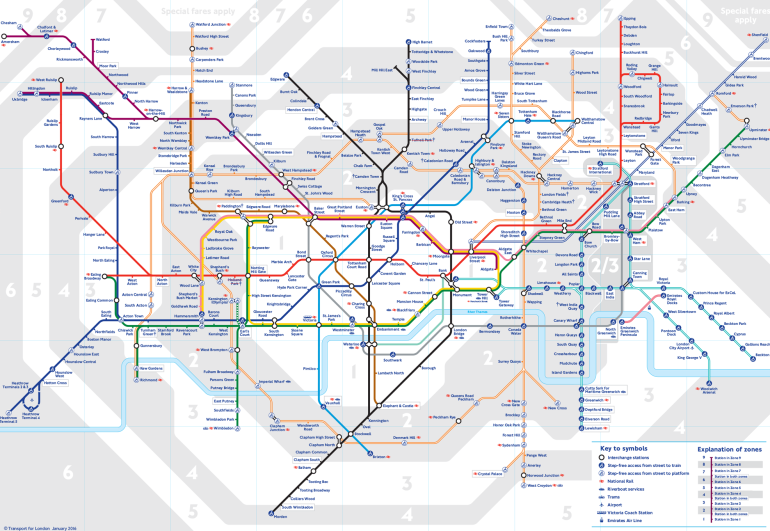 London Transport Museum — If you want to learn more about London’s tube, as well as its buses, trolleys and taxis, the Transport Museum is a fantastic and fascinating resource. It’s full of hand-on history and has the only museum gift shop I’ve been really excited to exit through.

NOTE: I looooooooooove subway maps, and when I saw the book Transit Maps of the World on a shelf in Barnes and Noble, I had to stifle a scream. It features historic and current transit maps from more than 100 cities worldwide. I love this book!!!

That concludes my list of London suggestions … other than my recommendation to get off the beaten path whenever possible. Even if you’re visiting a place like the Tower of London, consider walking just a few blocks northwest into “The City” where, on a Saturday or Sunday, you’ll be amazed by how quiet things are when corporate London is gone for the weekend. If you’re going to Camden Town, walk the Regent’s Canal towpath for a unique experience away from the tourists. If you’re near Speaker’s Corner in Hyde Park, think about heading up Edgware Road for some of the best shawarma you’ll ever eat.

But save room during your trip for a Full English! 🙂