This quote is attributed to English writer and poet Samuel Johnson, and I could not agree with him more. London was my first solo travel destination in 2010 and a place I’ve returned to again and again whenever my budget and vacation accruals have allowed.

You can find plenty of travel books listing all the typical, London must-sees, but I like to seek out the less touristy stuff too. So … after you’ve ridden the London Eye, toured St. Paul’s Cathedral and strolled down Portobello Road (all good stuff), here are some things to consider adding to your London to-do list:

Alternative London Tour — There’s no street art like London street art. I’ve taken this walking tour on three separate occasions, and it’s always been fascinating to see what’s changed, what’s remained the same, and how London’s East End has continued to evolve. These tours are led by local artists who are passionate about their community and uniquely connected to the city’s creative culture. 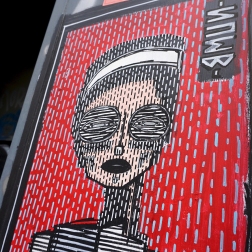 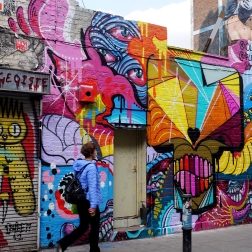 Cringe UK — Cringe originated in NYC and later crossed the pond to spawn similar events in London. The concept is simple — adults read excerpts from their teenage diaries, on stage, in front of a live audience. Most teen diaries are pretty funny in hindsight, and that’s the driving spirit behind Cringe. I’ve attended two of their events in London, most recently on May 4, when a dozen adults read diaries that spanned generations from the mid ’60s to the late ’90s. Regardless of the year, the angst-ridden themes remained the same: falling in love, falling out of love, unrequited love … and my parents are so unfair. Every Cringe event I’ve attended has been packed (get there early!), and everyone in the audience has been enthusiastic and supportive. My favorite diary entry came from a woman who saw Meatloaf when she was a teen in the ’80s. She ended up getting upset because he used so many swear words during the concert. She wrote: I went to the concert as Meatloaf’s biggest fan … and left as his biggest ENEMY!

Spark London — Just like The Moth in the United States, Spark London celebrates the art of storytelling. At their live events, people tell true stories, on stage and without notes. I attended my first Spark London in the fall of 2010 (as an audience member). Back then, Spark was pretty new and only hosting storytelling nights every other month or so. It’s amazing to see how much they’ve grown in the succeeding years. Now, they have multiple events each month in venues all over London. They also have a podcast, open mic nights, and events in Bristol and Glasgow. Hooray!!!

National Gallery — This museum houses one of the world’s great collections of Western European art from the 13th – 19th centuries. It also houses my all-time favorite painting: Jan van Eyck’s The Arnolfini Portrait. I like to enter the gallery on a weekday, as soon as it opens. I head straight to room #56 where I can enjoy some serious Arnolfini staring time (all by myself) before other patrons arrive. Admission to the National Gallery is free, which means you can spend as much, or as little, time there as you like. But you don’t have to rush to room #56 (or London) to stare at The Arnolfini Portrait. You can zoom in on all of its stunning detail here. Or take a virtual tour of 18 different National Gallery rooms here.

National Portrait Gallery — This museum is next to the National Gallery, but doesn’t seem to get as crazy-crowded. Currently, there’s a terrific Vogue anniversary exhibition that celebrates the magazine’s Century of Style. The museum’s permanent collection includes two floors of portraits, like the one of Sir Paul at the top of this post and the Tudor section where you can see paintings of Elizabeth I, Henry VIII and Mary, Queen of Scots. 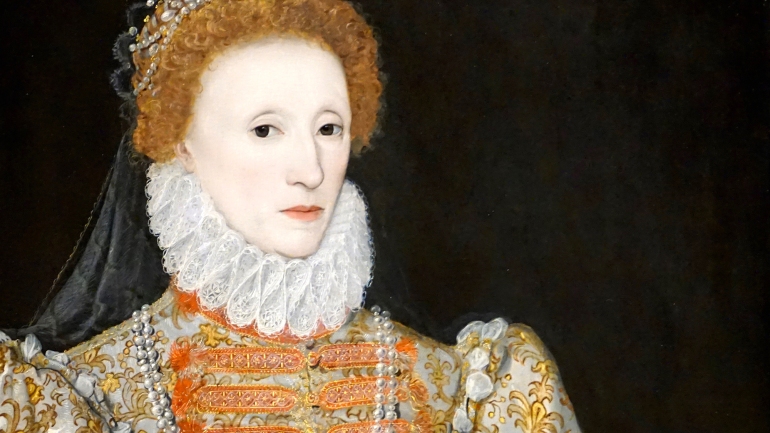 The School of Life — This organization uses culture to promote emotional intelligence. They host all kinds of events and courses throughout the year and also book some really wonderful guest speakers, like Cheryl Strayed, Jon Ronson and Michael Pollan. I won’t be in London to see Amanda Palmer on May 29, but I have attended some of their events in the past, and they’re fantastic.

William Wallace Memorial — I loved the film Braveheart, but it took a lot of creative license with what little is known about Scottish hero and patriot William Wallace. One thing historians do know is that Wallace was tortured and executed near the site of this memorial in West Smithfield.

Greenwich – The Royal Observatory, the restored Cutty Sark, and Greenwich Market are all great reasons to visit this borough that’s a quick and easy train ride from Central London. To get there, take the DLR (Docklands Light Railway) to Greenwich’s Cutty Sark station. You can also get off one stop earlier at Island Gardens and walk the rest of the way via the foot tunnel that runs underneath the Thames. After I’ve enjoyed my time in Greenwich (and synchronized my watch), I like to head back to London by boat on the Thames River Bus.

Sir John Soane Museum — This is my favorite London museum. Sir John Soane was a neo-classical architect. After his death in 1837, his magnificent home was turned into a museum filled with an eccentric, eclectic collection of paintings, sculpture, and artefacts … including a 3000 year old Egyptian sarcophagus. This museum is free and wonderful to visit any time of year. But, on the first Tuesday of every month, they host a special, candlelight tour at night. Once inside, you can roam the home’s multiple floors at your own pace.

Crystal Palace Park and Dinosaurs — You won’t see many tourists in this huge park just beyond Crystal Palace train station, but you will see a lot of dinosaurs! These famous sculptures date back to 1854 and were the first dinosaur sculptures in the world. Based on what scientists know now, most of them aren’t very accurate, but they’re still very cool. Other cool things at Crystal Palace Park include a big lake, lots of green space, a sports arena, a cricket field, and a giant maze carved out of hedges. Once you find your way to the maze’s center, there’s an emblem embossed in the concrete floor with the words: Pause here a while – Listen for the echoes.

I tried to pause and listen … but all I heard were echoes of parents screaming at their kids to stop running ahead and getting lost in the maze. 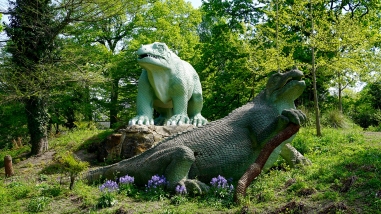 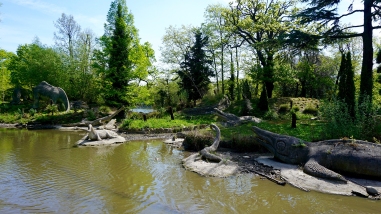 Borough Market off-peak — This foodie market next to London Bridge station is hugely popular and jam-packed with tourists on Saturdays (it’s closed on Sundays) and before/during/after lunch on weekdays. It’s a wonderful place to visit, but it can be hard to enjoy your time there when the crowds are at their thickest. My tip is to visit on the weekdays, closer to 3:00 p.m., when it’s MUCH easier to stroll through the market. Plus, you don’t have to wait in long lines to make a purchase.

Leather Lane — Clerkenwell is my favorite London neighborhood, and Leather Lane is a Clerkenwell street that’s lined with food trucks/stands every weekday. The lane also has a diverse, delicious mix of storefront restaurants and a bunch of great coffee shops. I particularly like Prufrock and Department of Coffee and Social Affairs.

Exmouth Market — Not too far from Leather Lane, this lively pedestrian street has a little bit of everything. Except the awesome bookstore, Clerkenwell Tales, which closed in 2014. 😦

But there are other great bookstores! — Hatchards (since 1797) is London’s oldest bookstore. I’ve also gotten many enthusiastic book recommendations from staffers at the fabulous Daunt Books (with six locations to serve you). The awesome Magma is small, but packed with art, books and other goodies. These photos are from their Clerkenwell store: 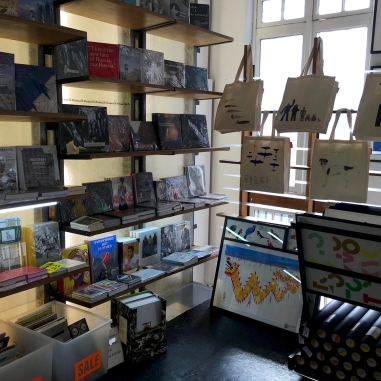 BFI and ICA — If you’re a film lover, seeing anything at the British Film Institute is a real treat. Each month, BFI Southbank screens classic and current films and hosts a variety of special events. The Institute for Contemporary Arts also offers great choices for cinema-goers.

Marylebone station — If you’ve seen A Hard Day’s Night, you’ve seen this London train station. The film’s opening sequence was shot both inside and outside Marylebone. You can run down the same sidewalk that JPG&R ran down in 1964! Just don’t trip and fall like George did. 😦 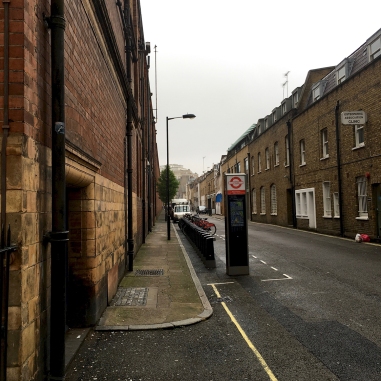 Abbey Road Zebra Crossing — Of course, no Beatle fan’s trip to London would be complete without a visit to Abbey Road. Just make sure you take the underground to St. John’s Wood instead of the DLR to Abbey Road station that’s waaaaaayyyy outside of Central London. You can also visit the online crossing cam that streams live video (with sound!) from Abbey Road 24/7. Tip: If you’re there in person and cross the road, make a note of the time. You can search the crossing cam’s archive later and watch your own crossing! 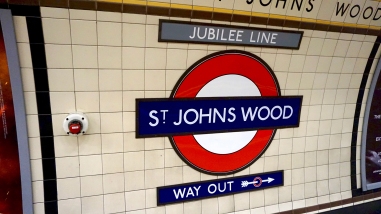 Beatles “In My Life” Tour — London Walks offers a variety of excellent walking tours, including some Beatles-themed walks led by Fab fan Richard Porter. His “In my Life” tour was my first tour (of any kind) in London, and it was fantastic. As I mentioned in a previous post, if you watch the crossing cam’s live feed on Tuesday and Saturdays at approximately 7:00 a.m. CT, the camera’s microphone usually picks up Richard’s audio as he leads the tour through that part of the city.

That’s the end of my list for now. More suggestions coming soon!