My walks in Mumbles, Wales

There’s so much to explore in Wales, it can be hard to know which way to turn once you arrive. After spending a few days in Fishguard, I decided to head southeast for another coastal town — Mumbles.

But before I talk about my time in Mumbles, a little scene-setting first.

Just getting to Mumbles was a treat. I loved that the train station in Fishguard (I actually boarded at Goodwick) had just one track. No way I could screw that up!

The station was so small, it didn’t have a ticket machine, so I had to purchase my fare onboard from the conductor. I loved how he was so helpful and chatty. I didn’t have exact change, so the lady sitting next to me insisted on paying the extra 20p. She and I ended up talking all the way to Carmarthen where we both had connections. She told me about her kids and grandkids, and I learned that she’d once owned a bed and breakfast in a neighboring town … and that it was haunted.

Not that I believe in that kind of stuff, of course.

(Whispers: I totally believe in that kind of stuff!)

While traveling through Ireland and Wales, I’ve encountered something again and again that I refer to as the hand-off. No matter where I’ve gone, I’ve fallen into conversation with a different person every step of the way, like I’m being kindly passed along like a baton. When the aforementioned lady and I got off the train, we were walking on the platform when I felt a tap on my shoulder from behind. It was this woman in the photo below … the one I’d met in St. Davids!

St. Davids woman and I chatted for a bit before going our separate ways. When I got on my connecting train, a new lady seated across the aisle wanted to make sure I got off at the right stop … even offered me some of her food. No wonder I love this country so much!

When I arrived in Mumbles, I felt like I’d struck the location jackpot again. My bed and breakfast was situated a few blocks away from the gorgeous seaside and cliffs. It was also just steps from the town’s Oystermouth Castle:

Once I got settled in, my (awesome!!!) B and B hosts suggested a 2-hour walk that followed a path along the coast, then looped back into town. I loved this walk so much, I did it twice on two separate days.

I don’t think any of my photos to date have truly captured the magic of walking along the massive cliffs, and sea-level beaches, that line the Welsh coast. But here are my latest attempts: 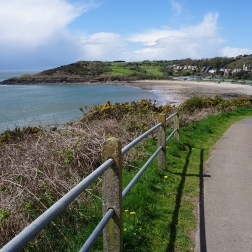 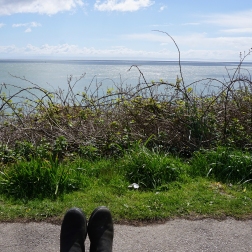 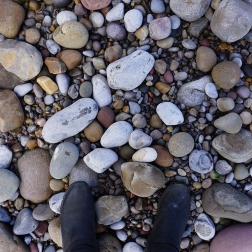 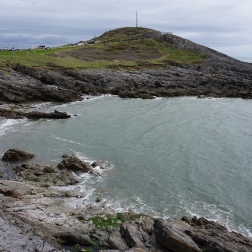 My walk in Mumbles also took me past the town’s lighthouse … and pier … and a stop I just had to make. Joe’s ice cream is a legend in these parts, and there’s no way I could resist!

My walk through town also gave me the chance to finally sample some proper Welsh foods: rarebit, cockles, and lava bread.

Every time I saw rarebit on a menu, my brain kept thinking rabbit. Actually, it’s basically just cheese on toast. Cockles are saltwater clams, which you can see in the ramekin at 12:00 on my plate. Right next to the cockles is the lava bread. It’s actually not bread at all. It’s a mushy spread made from seaweed. The (very patient!) waitress said that it would be appropriate to put the lava bread on the rarebit. The ramekin at the bottom of my plate is full of chutney.

I loved the cockles, liked the rarebit, and sort of liked the lava bread.

But my favorite Welsh food so far has been Joe’s. 🙂