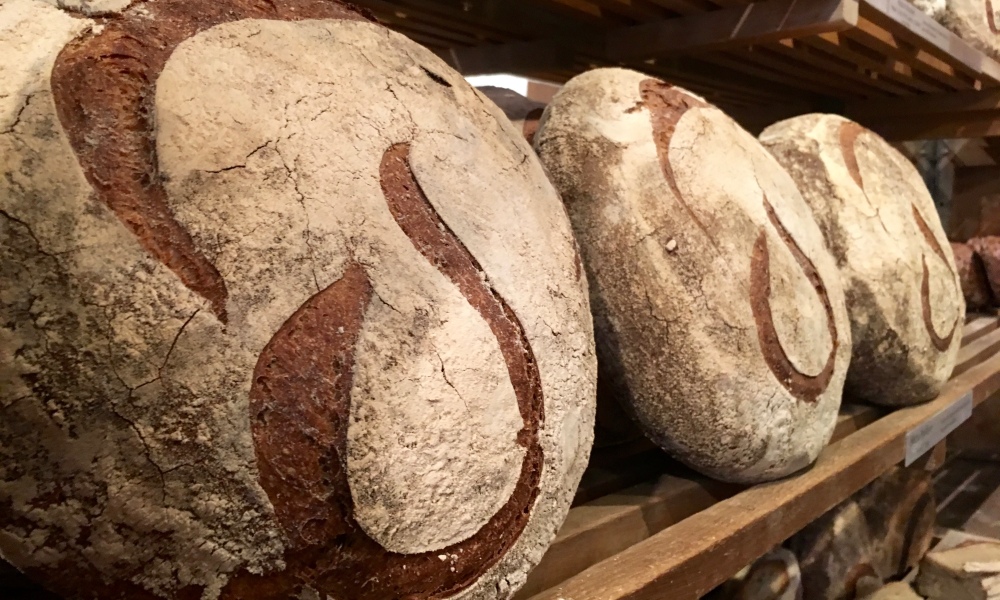 I’m not always a big fan of organized tours, but I went on a food tour in Paris that I highly recommend!

Paris by Mouth takes guests on tours through different Paris neighborhoods. I took the Saint Germaine tour. The three hours of walking, learning and eating set me back about $100, but I thought it was money well spent. I really liked my fellow tour-goers and the host, Sara Garcia, was really knowledgeable about food and passionate about sharing her love of French culture.

Note: I’m not a foodie, and this was my first food tour, so I have no baseline for comparison … but I really enjoyed it! I also liked that the tour was capped at seven participants and was accessible for food experts as well as someone like me who didn’t know her Ispahan from a Selles-sur-Cher.

Here’ are the places we visited and the things we ate:

Poilâne bakery at 8 rue du Cherche Midi, 75006 — This bakery makes beautiful and delicious miche (large round) loaves, apple tarts and punition (French shortbread cookies). We tried all three. This bakery is quite famous and has a rich history. Plus, they’ll deliver their delicious loaves all over the world! Here’s an interesting article about the bakery and the daughter who took over the family business after her father passed away. 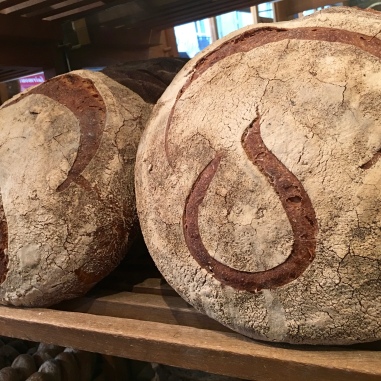 Pierre Hermé pastry shop at 72 rue Bonaparte, 75006 — You see macaron shops everywhere in Paris, but I don’t think any are this famous or frou-frou! Pierre Hermé has taken the traditional macaron and added his own twist, creating one-of-a-kind flavor combinations that are only sold for brief periods of time before being replaced by new flavors. We tried the rose and jasmine macoron, which I really liked. We also were able to get the last two Ispahan croissants which are Hermé’s signature combination of rose, raspberry and litchi. They usually sell out quickly each morning, so we were lucky to get any at all. When we were there, the line of customers was out the door. 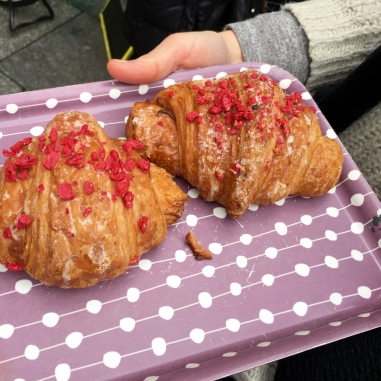 Patrick Roger chocolate at 6 Place Saint Sulpice, 75006 — Patrick Roger is a winner of the prestigious Meilleur Ouvrier de France award, which means that he is recognized by the French government as a craftsman of his trade. Like Pierre Hermé, he also creates interesting flavor combinations. We tried a traditional rocher noir (dark chocolate covered hazelnuts) as well as another chocolate flavored with lemon and basil. Here’s a CBS profile of Patrick Roger that was produced in 2014. There’s also a documentary you can stream on Netflix about the MOF called Kings of Pastry.

Marché Couvert (covered market) de Saint-Germain at 4/6 rue Lobineau, 75006 — What a beautiful market! Sara says it’s the place where the Barefoot Contessa, Ina Garten, shops. Even though I don’t cook, I was absolutely captivated by the diverse selection of seafood, meat, poultry, cheese and produce. Note: This market is closed on Mondays. 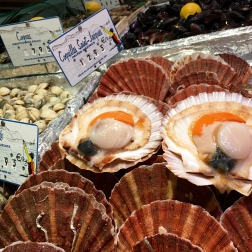 Here are all the Marché Couvert goodies we sampled. I’m including Sara’s descriptions:
– Le Rosmarin (goat, 2 weeks, Provence): This fresh goat’s cheese is flavored by the herbs in the diet of the goat in addition to the sprinkling of herbs on the cheese as it is aging.
– Selles-sur-Cher AOC (goat, Loire, 10-21 days): Flat disk with a moist, heavy and claylike texture. Aged at least ten days but usually three weeks.
– Petit Gaugry (cow, Burgundy, 4 weeks): Washed with Marc de Bourgogne, this is basically a baby version of Epoisses – smaller in size and aged for less time.
– Brie de Meaux AOC (cow, Ile-de-France, 6-8 weeks): Can taste of mushrooms, earth, wet leaves, mushrooms sauteed in butter, mushroom soup made with beef stock, or oysters. Some longer-aged versions have a strong ammonia smell which a few connoisseurs like. Hand-ladled using a perforated ladle (dates back to 12th century) that allows the curds to be transported to the mold unbroken in order to achieve the smooth, voluptuous custard-like interior.
– Petit Basque (sheep, Pyrénées Atlantic, 8 months): This pressed cheese is hard in texture but supple in the mouth with a nutty flavor. Also comes flavored with piement d’espelette.
– Fleur du Maquis aux Herbes (sheep, Corsica, 1-3 months): Also known as Brin d’Amour, this soft textured sheep’s milk cheese has a pronounced herbaceous flavor because of the wild herbs and chilis packed onto its rind.

La Dernière Goutte wine shop at 6 rue Bourbon le Château, 75006 — This is where we sampled all of the cheeses, along with two different kinds of wine: 2013, Menetou-Salon, Domaine Phiippe Gilbert and 2013, Saint-Jean de Minervois, Clos du Gravillas.

When the tour was over, I walked away feeling happy and full … and much less intimidated by the cheese counter! All of the places we visited are places I’d love to return to again and again. I’m sharing the list in case you’d like to visit them someday too.